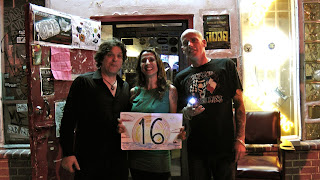 The bartender carried a taser. Sad, broken double decker buses cast their long shadows on the sidewalk from the pub parking lot across the street. Wheelchair Willie pushed himself backwards down the road using his legs. A chest of drawers balanced on a shopping cart creeped into the darkness of a side road.

I was booked for a cancer benefit at the club. Oscar and I showed up early. The Scottish taser carrying bartender said he knew nothing about there being music that night and that I would have to wait until the booker showed up, if he showed at all. I sat down bemused for a pint of stale Guinness and leafed through the local paper.

It was there in the back pages that I discovered a small ad the club had taken out: "GIG 365: January 16 @ Churchill's Pub." I pointed it out to taser man. "Well, you better get set up then!"

I more or less improvised the entire set, surrounded by most of the dozens of instruments that lived in my van. Most of the audience sat at the bar or were in the room next to the performance space playing pool, drinking, and talking as the dusty muted televisions flickered.

Taser dude was also the soundman. He burned a CD of my show and said he enjoyed it. "Never heard a squeezebox like that"

Earlier that evening a few blocks from the club, a bunch of men gathered around a smashed broken door with hammers and drills. I heard them speaking French, and grabbed my accordion to play them a Gus Viseur tune. They smiled and took a break from their repair work for a moment as the music echoed off the facade of their " Buena Vista Deli." 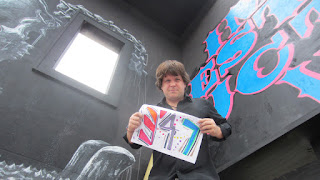 I was due to pick Oscar up at Miami airport later that evening, so I planned to arrange a gig somewhere close before heading over there. I had a nice lunch at a restaurant in Little Haiti and recalled the deli I had stopped at back in January.
It took me some time driving around to find it. Inside, there were two women serving behind the counters.
"Could I please speak with a manager?"
They pointed to another woman in the corner.
"Would you like some music today?"
She gave me a puzzled look (which, with 346 gigs behind me I was well used to at this point)
"We don't do music here, but you could try speaking with the owner about playing in the bistro next door. He is having lunch there now"
The bistro bartender pointed out a man dining with a statuesque black woman. I recognized him right away as one of the guys fixing the door.
"Hello. I stopped here back in January when you guys were fixing the door and played you a tune. I need a gig today and was wondering if I could play here"
He looked at me for a moment as he flicked through his memories. Then he stood up and smiled.
"Yes, I remember. Where would you like to play?"
I thought the deli would be best, so we both headed back over there.
"You are welcome anytime," he said as we entered.
"He is going to play here," he told the surprised manager.
I set up at table in the corner. An old man was eating lunch a few tables over. He listened for a while, then got up to head outside and gave me a smile and thumbs up. He came back after a few minutes and sat closer to me, directly across. I played the old cuban song, "Y Tu Que Has Hecho"
He began to cry, a few tears making their way slowly down his cheeks. When I finished he spoke his first words to me.
"My mother used to sing and play that song on piano for me. I am from Cuba. I have lived here in Miami for about 50 years"
Posted by MJWB at 12:31 No comments:


Thank you to all of my family and friends that shared the gift of music with me in 2011 and assisted me on the GIG 365 journey. All the very best for 2012.
Audio/Video from GIG #356 @ Corner of Frenchmen and Chartres Streets, New Orleans, LA w/Young Fellaz Brass Band.
A/V by Oscar Cainer.
Posted by MJWB at 13:26 No comments: